Learning to use your gears well is an important part of feeling comfortable and confident when riding. Here, we offer a simple introduction to gear use, to help you ride efficiently and with minimum wear on your bike.

To calculate the gear ratio for a particular gear, divide the number of teeth on the front cog the chain is on, by the corresponding number on the rear cog. The gear ratio determines how many times the rear wheel is pushed around by one turn of the pedals. High gear ratios let you go faster at the same pedaling rate, but require more power. Low gear ratios mean there is less resistance when you turn the pedals, which helps on hills.

Depending on your particular bike set-up, different ranges of gear ratios are available. Road bikes often have a compact crank at the front, with 50 teeth on the big chain ring and 34 teeth on the small ring. The rear cassette also has a range of teeth sizes. For example, an 11-speed cassette might have 11, 12, 13, 14, 15, 17, 19, 21, 23, 25 and 28 teeth. Calculating gear ratios for this example gives:

The gear ratio changes by nearly four from the highest to the lowest end, but some of the values overlap. For this reason, 2 front chain rings plus an 11-speed cassette doesn’t give you 22 distinct gear ratios. Similarly, for a triple chain ring, the number of gear ratios is less than three times the number of cogs on the rear cassette.

This is referred to as “crossing the chain”, and experienced riders will advise you to avoid it. There is no need to use these gear choices anyway, as similar gear ratios are available on the other ring. If you are on low gears on the big chain ring and feel the need to go lower, it’s best to switch to the small ring. Similarly, if you are in low gears and moving up, like when cresting a hill, you should shift to the big chain ring. 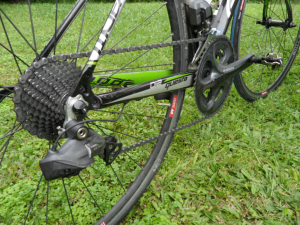 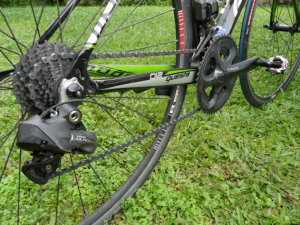 Left: crossed chains in the big ring. Right: the same gear ratio in the small ring.

It’s worth knowing what crank and rear cassette you have on your bike. This involves nothing more complicated than reading off the values on the cogs. (You can also just count the teeth). Road bikes are often fitted with standard cranks that give higher gear ratios. Standard cranks have 53 teeth on the big chain ring and 39 on the small ring. This gives 6% higher gearing on the big ring and 13% higher on the small ring, compared to a compact crank. You can use more power on the flat, but it will be harder to climb hills.

Conversely, if your largest rear cog has 28 rather than 25 teeth, climbing in first gear will be 12% easier. For even easier options, you can switch to a rear cassette with 32 teeth on the largest cog. This will give a gear ratio almost down to 1.0. Even so, road bike gearing is generally higher than mountain bike gearing. Mountain bikes often have a gear ratio of 0.7 at the bottom end of the range, because of the greater difficulty of climbing steep and rough inclines.

Bike Knack is happy to assist with gearing by advising on and fitting suitable parts to your bike. Dave can be reached by phone on 0437 017022, or you can send us an email.

Due to shipping constraints caused by COVID-19, Bike Knack will only ship to Australia and New Zealand until further notice. Dismiss